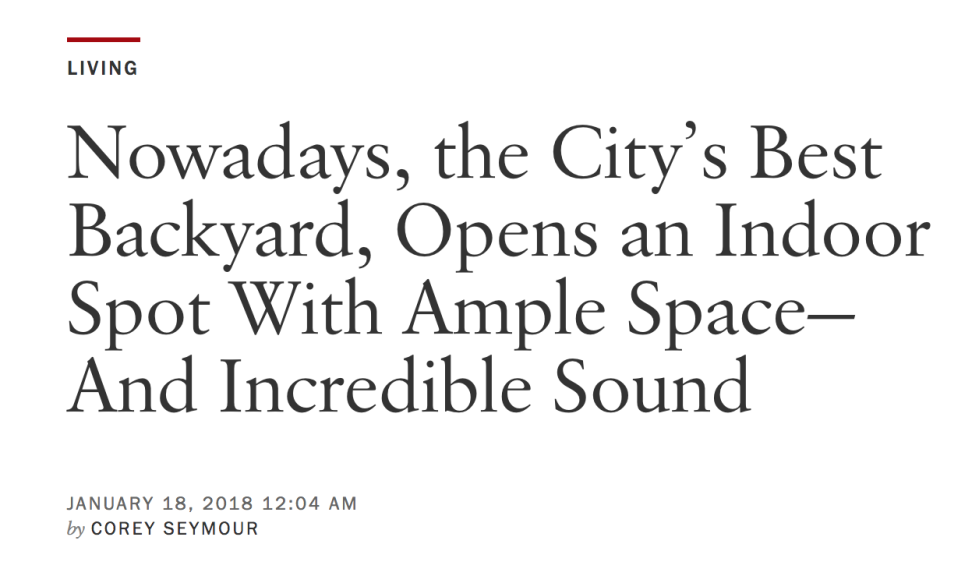 Shortly after Justin Carter and Eamon Harkin opened Nowadays—an open-air venue between Bushwick, Brooklyn and Ridgewood, Queens—in the summer of 2015, it became that rare thing, the multifaceted casual hang. The place hosted two of the city’s most anticipated and sought-out electronic-centric parties, Mister Saturday Night and Mister Sunday, occasionally featuring renowned guest DJs flown in from around the world. An array of food truck options provided dining far better than virtually any music venue this side of Café Carlyle, and an active calendar of extracurriculars—from guest lectures on topical pop culture and science to ping-pong tournaments—kept any preconceived notions about dark, dank, dystopian dance-music venues on the other side of the gate.

Perhaps best of all: Since the space rambled over 16,000 smartly landscaped square feet, you could show up with a whole bunch of friends on, say, Friday night at 10:00 p.m. and not worry about having to shoehorn your entourage past the bouncer.

All of which was, of course, beyond wonderful—when the weather was warm. Or not snowing. Or raining. Or sleeting. Tomorrow, though, changes all that as Indoors at Nowadays—a just-renovated warehouse directly adjacent to the outdoor space—officially opens its doors, with food overseen by Henry Rich of Rucola and Metta, board games like Settlers of Catan behind the bar, and an armada of whiskeys and mezcals and beer and wine and house-proud custom cocktails, along with a host of nonalcoholic options.

And then there’s the sound system, which is arguably the most carefully thought-out, designed, and executed combination of electronics and interior design—among many, many other renovations, the concrete floor in the DJ area was replaced with wood, which absorbs and refracts sound in a far warmer and more pure fashion. (A month or so ago, I joined Carter, Harkin, and an ad hoc assemblage of audiophiles and sound designers as various component options were tested to help fine-tune the system, and will say only this: This was a crowd that can not only debate the difference between various copper wires on a turntable—they can tell you stories about such legendary copper wires as they’re experienced by different cultures around the globe.) The end result: Music rendered in the sort of dynamic range and crystal-clear distinction that moves people nearly to tears—or all the way to dance.

In addition to that, there’s a smaller tube-amp system with vintage Altec Lansing Voice of the Theater speakers—legendary components from the ’70s originally designed for movie theaters, and highly sought-after among collectors—designed to summon the intimate feel of Japanese listening bars.

All that said, one needn’t be an audiophile—or even an electronic-music enthusiast who likes to dance till dawn—to enjoy the place. Hell—you don’t even have to dance. Indoors at Nowadays boasts plenty of big windows, a herd of houseplants, and enough free-roaming space to make it a family mecca too. (Full disclosure: My kids have a playdate scheduled there this weekend.) Every Sunday night, meanwhile, is given over to something called Planetarium, which features ambient- or drone-centric music perfect for camping out on the dance floor in a pile of pillows and blankets (no talking allowed) for a few hours. The Nowadays lecture tradition continues, with one coming up focused on Stranger Things and Cold War nostalgia taught by a local professor with a doctorate in American history.

Like everything Carter and Harkin have done with Nowadays, the overriding focus of the indoor venue isn’t about exclusivity or obscurantism in the name of cool: It’s about fun.

“There’s a certain amount of darkness and dystopia that was associated with the dance world that we’ve always tried to steer clear of,” Carter says. “We’ve always tried to do something that’s inviting—from our name to the art on our flyers. I mean, Nowadays isn’t even a club—it’s a place where people hang out.” Starting tomorrow, add “come rain or come shine” to that.

Begin typing your search above and press return to search. Press Esc to cancel.